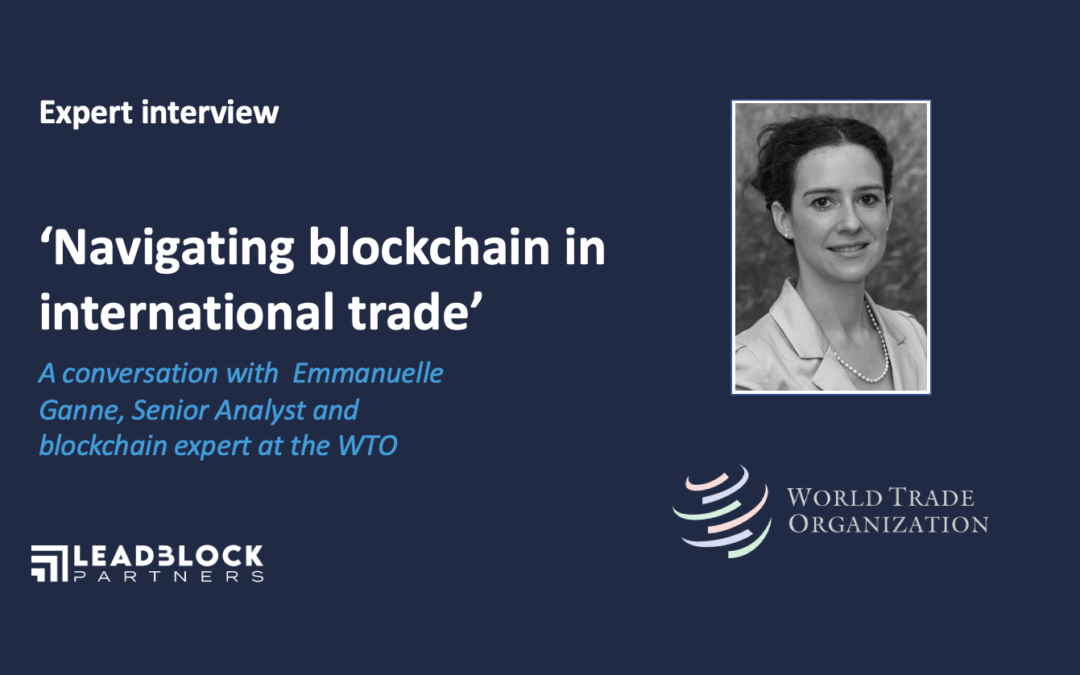 “International trade remains very labour and paper intensive. Shipping roses from Kenya to Rotterdam involves around 30 actors and more than 100 people. It generates a pile of paper that is 25 cm high, and the cost of handling it can be higher than the cost of moving the container. Unfortunately, despite more than two decades of digitization efforts, only 0.1% of bills of lading are issued electronically so there is still a lot of unfilled potential. Going digital could generate substantial savings in trade. The Digital Container Shipping Association recently estimated that if 50% of bills of lading were digitalized, it would lead to $4bn of potential annual savings.”

“Blockchain presents many different opportunities for international trade, from greater transparency into how goods are being produced, to more efficient processes thanks to peer-to-peer interactions and automation through smart contracts. It can curb fraud by making it impossible to use trade documents to secure double-financing as has been the case in Asia causing massive fraud scandals. It can make access to finance, including trade finance, easier through deep tier financing, for example, or by allowing companies, in particular small ones, to build a credit history. It can cut the time needed to process trade operations, including trade finance. In short, it can make trade more transparent, efficient and inclusive.”

“There are a lot of projects related to supply chain transparency, be it to enhance efficiency, assert certain claims, such as provenance, build consumer’s trust, track tainted products, or fight counterfeits. There is also a lot of activity and traction in areas like trade finance and transportation and logistics.”

“Technology is only a tool. It requires an enabling legal framework to be used to its full potential. This is particularly true when it comes to trade. For Blockchain to have an impact on cross-border trade, there needs to be legislation in place to recognize e-signatures and e-documents on a global scale, for example. The WTO is a rules-based organization. It develops rules for trade and can therefore help to foster the right regulatory environment to allow blockchain for trade to be deployed on a wide scale. The ongoing negotiations on ecommerce touch upon a number of issues that are critical to support trade digitalization. A large part of my work also consists in raising awareness and educating government officials and other stakeholders about the potential of digital technologies, and of blockchain in particular, to facilitate trade.”

We use cookies on our website to give you the most relevant experience by remembering your preferences and repeat visits. By clicking “Accept All”, you consent to the use of ALL the cookies. However, you may visit "Cookie Settings" to provide a controlled consent.
Cookie SettingsAccept All
Manage consent

This website uses cookies to improve your experience while you navigate through the website. Out of these, the cookies that are categorized as necessary are stored on your browser as they are essential for the working of basic functionalities of the website. We also use third-party cookies that help us analyze and understand how you use this website. These cookies will be stored in your browser only with your consent. You also have the option to opt-out of these cookies. But opting out of some of these cookies may affect your browsing experience.
Necessary Always Enabled
Necessary cookies are absolutely essential for the website to function properly. These cookies ensure basic functionalities and security features of the website, anonymously.
Functional
Functional cookies help to perform certain functionalities like sharing the content of the website on social media platforms, collect feedbacks, and other third-party features.
Performance
Performance cookies are used to understand and analyze the key performance indexes of the website which helps in delivering a better user experience for the visitors.
Analytics
Analytical cookies are used to understand how visitors interact with the website. These cookies help provide information on metrics the number of visitors, bounce rate, traffic source, etc.
Advertisement
Advertisement cookies are used to provide visitors with relevant ads and marketing campaigns. These cookies track visitors across websites and collect information to provide customized ads.
Others
Other uncategorized cookies are those that are being analyzed and have not been classified into a category as yet.
SAVE & ACCEPT
Powered by